With the rise of the AfD (Alternative für Deutschland), Germany’s party system now arguably includes a successful right-wing populist party. Political scientists have studied AfD manifestos (Arzheimer 2015) and candidate survey data to find out whether and in which ways the AfD can indeed be considered populist (Ceyhan 2016, Lewandowsky et al. 2016). According to the influential definition by Cas Mudde populism is a “thin-centered ideology that considers society to be ultimately separated into two homogeneous and antagonistic groups, ‘the pure people’ versus ‘the corrupt elite’, and which argues that politics should be an expression of the volonté générale (general will) of the people” (Mudde 2007: 23). In recent years, scholars have begun to extend the study of populism from political parties to individuals by developing measures of populist attitudes of citizens (e.g. Akkerman et al. 2014, Spruyt et al. 2016). Are supporters of the AfD populist in the sense that they hold majoritarian, anti-pluralist and anti-elite attitudes in accordance with Mudde’s definition of populism?

Colleagues of mine from Johannes Gutenberg University Mainz (Claudia Landwehr and Thorsten Faas) included a set of questions on “conceptions of democracy and preferences over democratic procedures” in the German GESIS Panel (see study description here). The GESIS Panel is a probability-based omnibus access panel that is composed to be representative of the (German speaking) German population aged between 18 and 70 years permanently residing in Germany. The items were part of a wave that was in the field between August 12, 2015 and October 14, 2015 and included 3,615 participants. These data allow studying whether AfD supporters views on democracy differ from those of other respondents. In order to do this, I use information on voting intentions collected in the previous wave of the panel (June/July 2015): Citizens were first asked whether they would vote if a national election were held next Sunday and, if yes, whom they would vote for. 149 respondents indicated a preference for the AfD (5.3 % of all valid answers, 6.8 % excluding abstentions).

With regard to citizens’ normative conceptions of democracy, one element of populism is a majoritarian vision of democracy that privileges the will of the majority, understood as the general will of the people, over minority rights and interest. The survey recorded to which extent individuals agreed with the following statements on such majoritarianism: 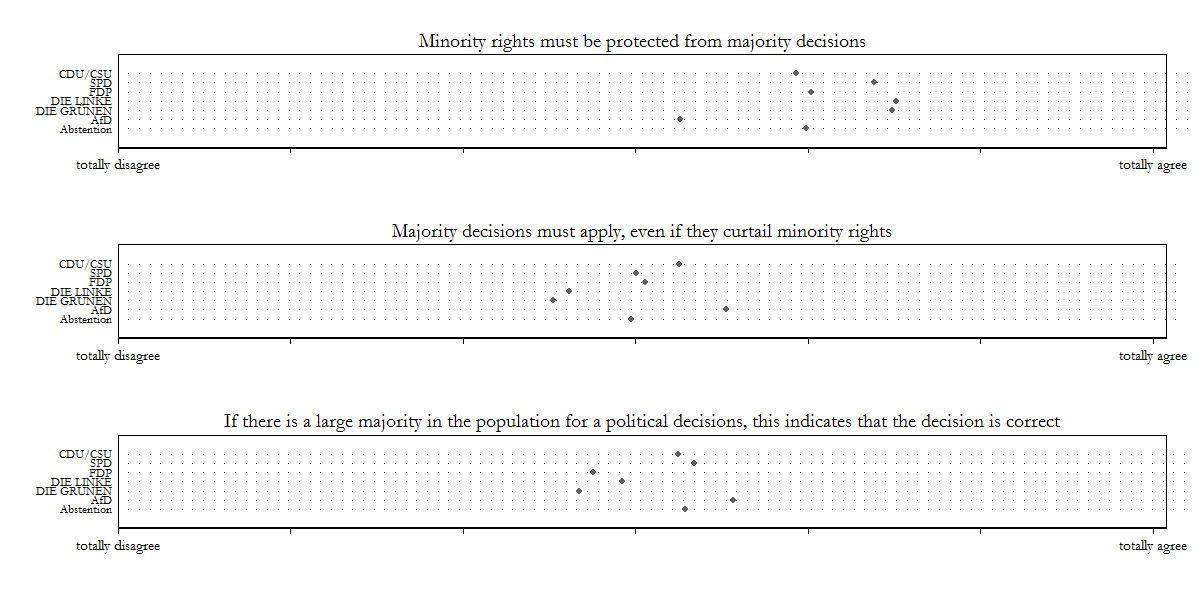 Do these differences extend to citizensâ€™ view on political representation? An influential distinction in this regard is the one between the trustee and delegate model of representation. The trustee model grants autonomy to elected representatives to decide in accordance with their own judgment while the delegate model favors strong responsiveness to preferences in their constituencies. We would expect populists to privilege the delegate conception. The figure below shows agreement with two statements that measure these different visions: AfD supporters are most likely to disagree that governments should stick to planned policies even if a majority of citizens is against them, even though abstainers and supporters of DIE LINKE hold largely similar views. With regard to the question whether members of parliament should follow their conscience even if a popular majority disagrees, AfD supporters tend to privilege the will of the majority and only non-voters hold even more delegate views of representation on this item. 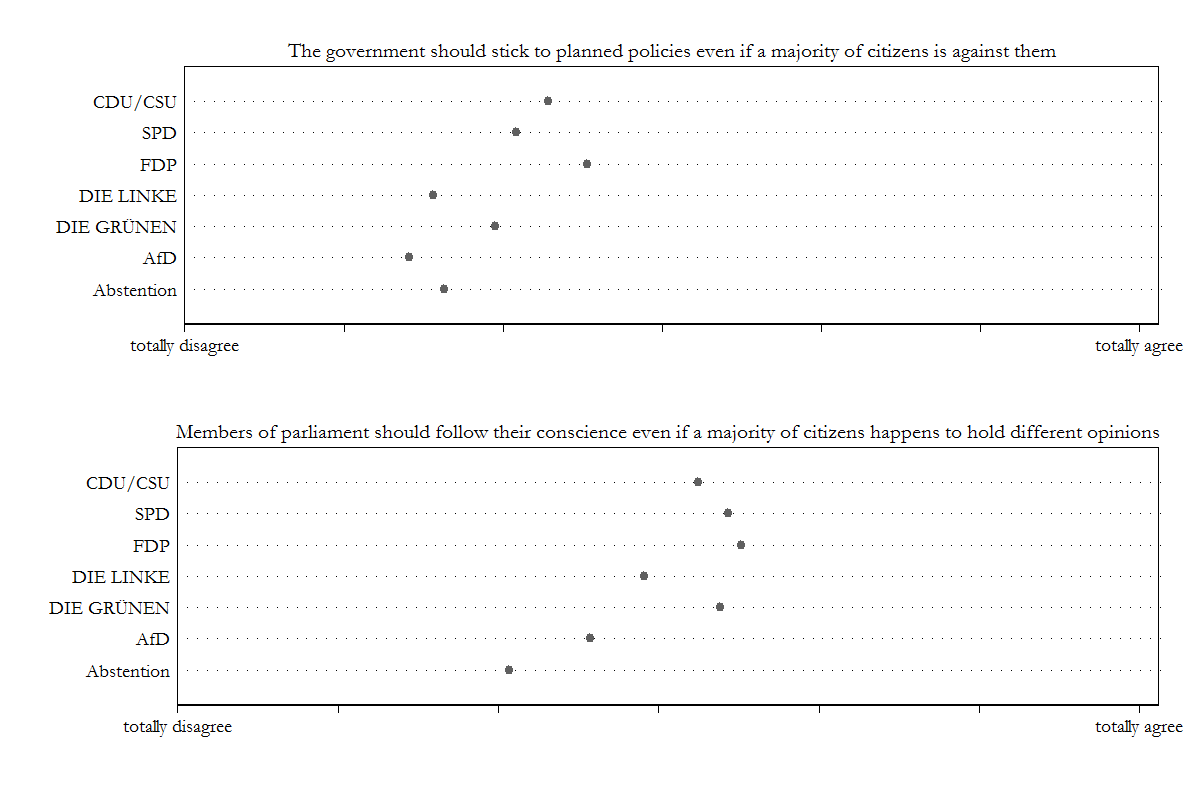 Another element to the populist ideology is a rejection of pluralism. In the words of Mudde and Kaltwasser (2013: 152), the key point of pluralism is the assumption “that societies are composed of several social groups with different ideas and interests. […] Hence, pluralism takes for granted that it is impossible to generate something like a ‘general will’ of the people.” The populist, thinking “that politics should be an expression of the volonté générale (general will) of the people” (Mudde 2007: 23), disagrees and disapproves of competition and negotiations between interest groups. As the figure below shows, AfD supporters indeed stand out in their anti-pluralism from supporters of all other parties. Interestingly, those who did not intend to vote are as anti-pluralist as those with a preference for the AfD. Both groups view struggles between different interest groups as relatively harmful to the common good and are most likely to agree that conflicts cannot be resolved through discussion and negotiation. 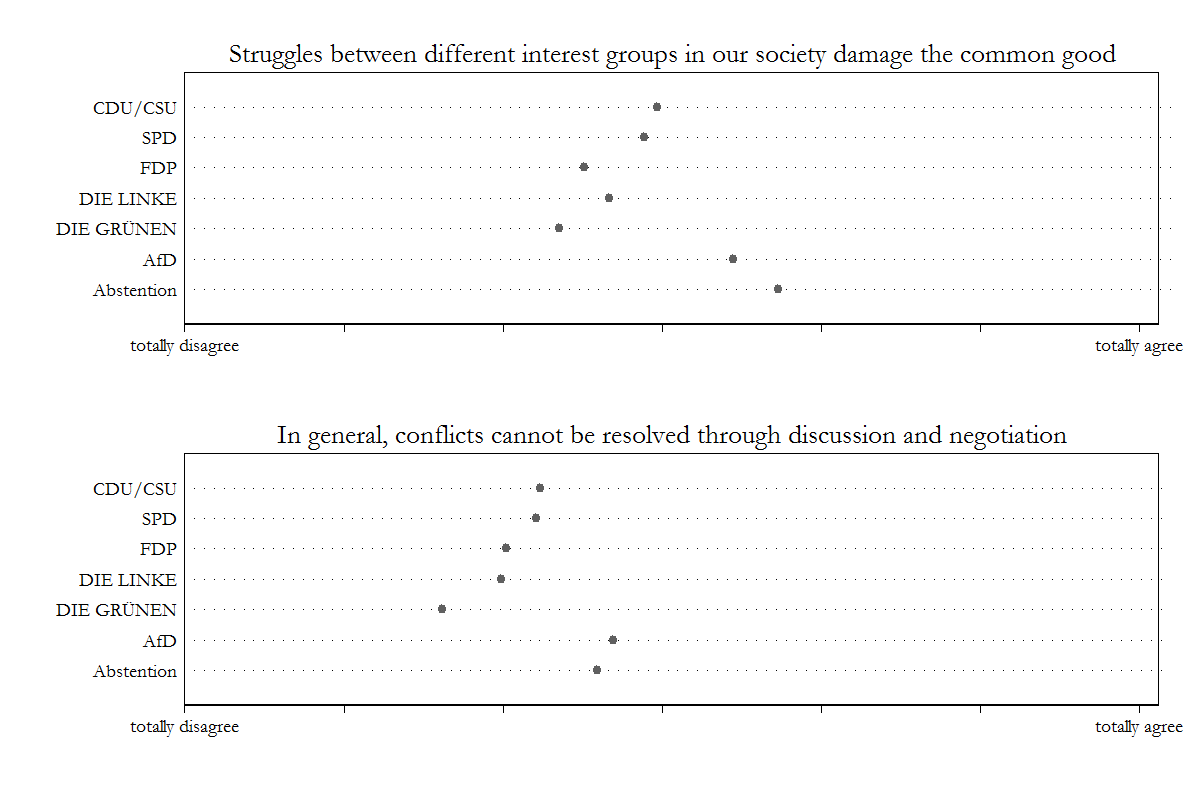 What these descriptive findings show is that AfD supporters are indeed relatively populist with regard to their views on democracy and stand out from supporters of other German parties in this regard. (Note that differences in means between AfD supporters and all other respondents are statistically significant for all items discussed above.) It would be interesting to explore in more depth whether these views on democracy help to explain votes for the AfD. In more technical terms, are these procedural views on democracy predictive of the AfD vote once we control for other determinants of voting for the AfD? And to what extent might these normative orientations towards democratic decision-making itself be shaped by the AfD. In other words: Does the AfD render their supporters more populist?