Recent controversies over trade agreements such as TTIP and CETA, protectionist stances by (right-wing) populist parties and candidates, but also the discussion of economic globalization’s role for income and wealth inequality have brought renewed interest in public opinion on globalization. In this post, I look into how public opinion on globalization (mostly its economic aspects) differs across European countries. I focus on describing these differences while leaving the question what explains these for future posts. While public opinion data on attitudes towards globalization are relatively scarce and most studies analyze single indicators, a particularly interesting and encompassing set of questions were asked as part of Eurobarometer 72.4 (a regular survey conducted on behalf of the European Commission in European member states and candidate countries) in October and November of 2009.

One important question is whether people think that globalization has overall positive or negative effects on their country’s economy. EB 74.2 asked respondents whether they see globalization as an opportunity for economic growth, a protection from price increases, as meaning more foreign investment for their country and, finally, an opportunity or threat for companies and employment in their country. The mean responses by country are shown in the figure below (demographic weights employed) and reveal striking differences. While, for example, three out of four respondents in France (FR) perceive globalization as a threat rather than an opportunity for companies and employment, the pattern is almost the exact reserve in Denmark (DK): More than 75% of Danes think that globalization is an opportunity rather than a threat. While the exact patterns differ somewhat from item to item, there is notable consistency: While France and Greece (GR) are always among the rather globalization-skeptic countries, the Danes and Swedes (SE) are consistently globalization-friendly. 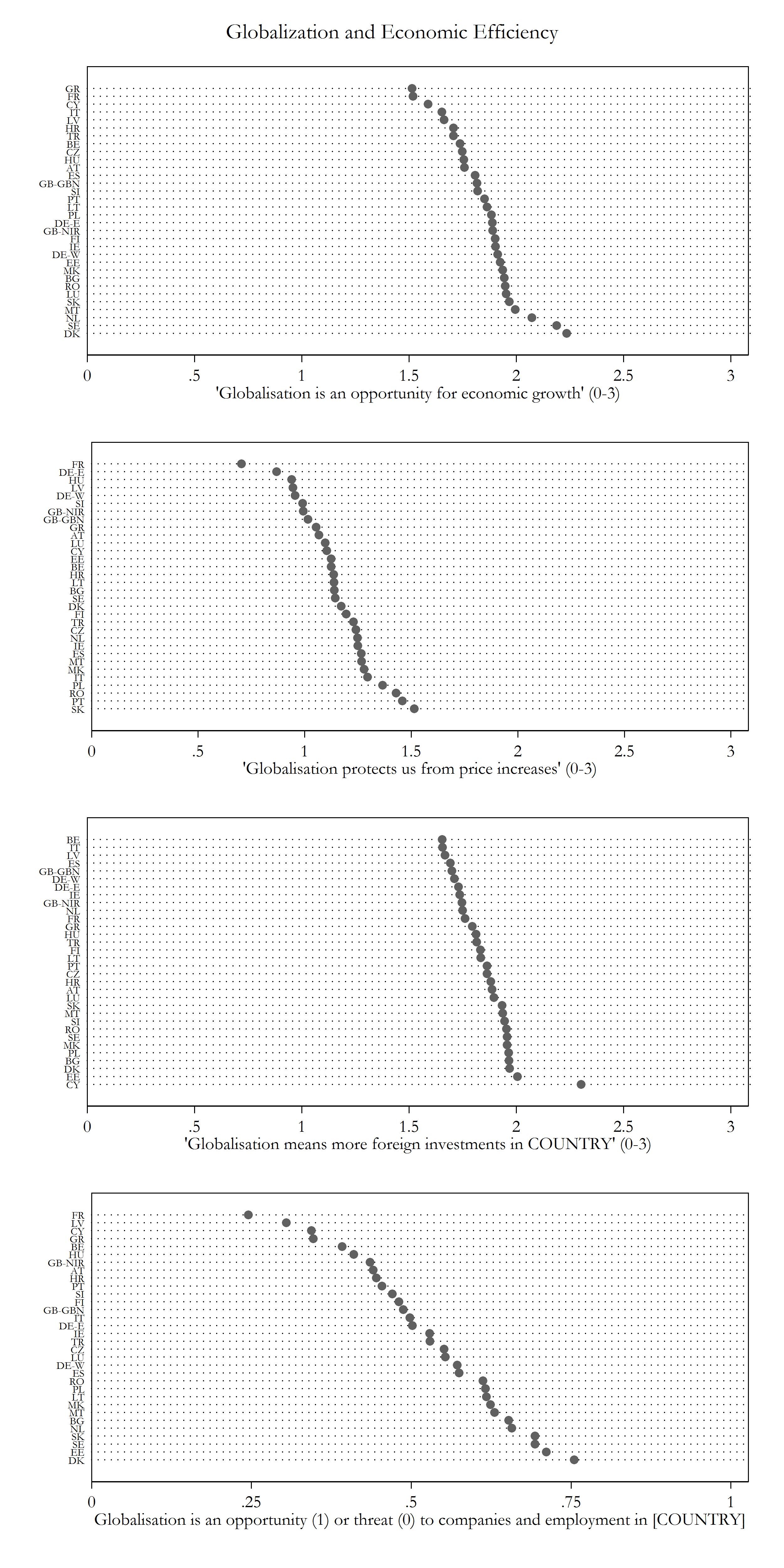 An often discussed aspect, be it in academic work or public discussions, is the effects globalization might have on economic inequality. EB 72.4 includes two statements tapping into this dimension by asking for globalization’s effects on social inequalities and whether globalization is profitable only for large companies and not for citizens. The results are in the figure below. Overall, European citizens tend to associate globalization with negative distributive consequences. Yet, the differences across countries are again strong and they are relatively consistent across the two indicators. Inhabitants of the small, open economies Denmark, Sweden, Netherlands (NL), Malta (MT) and Estonia (EE) tend to see less negative implications for inequality. Publics in Greece, France, Cyprus (CY) and Slovenia (SI) are strongly convinced that globalization increases inequalities and that it’s only large companies that profit. 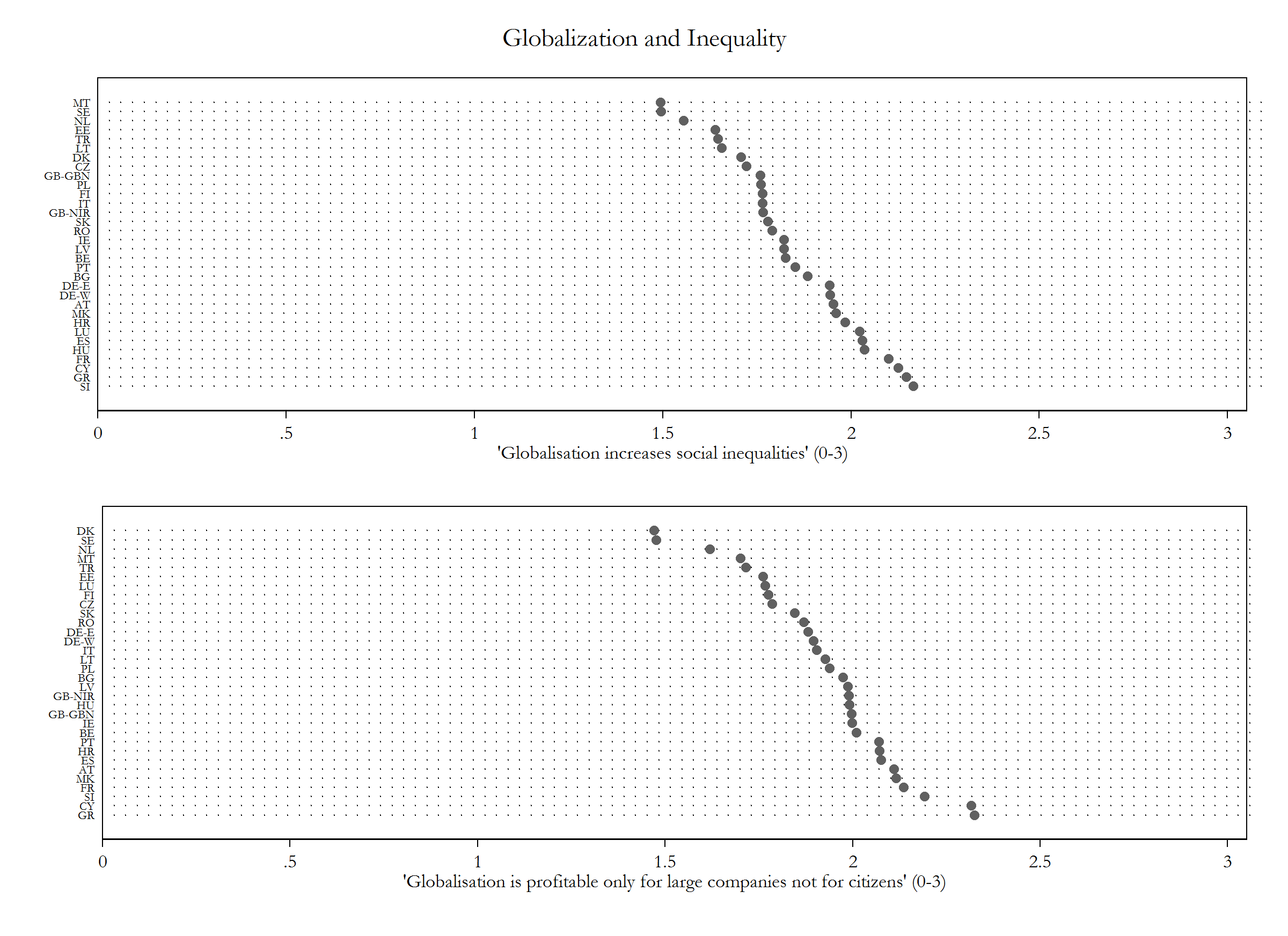 Globalization is not only an economic phenomenon but also denotes phenomena relating to internationalization in cultural and social respects. These different dimensions of globalization are interrelated in the real world and they are also likely to be interrelated in people’s minds. As for example argued and demonstrated by Yotam Margalit, opposition to economic globalization can arise as individuals fear globalization’s social and cultural consequences. Tapping into these cultural aspects, EB 72.4 included an item on whether globalization threatens the national culture (see figure below). Such fears are most widespread in Cyprus, Greece and Austria (AT), but also Ireland (IE) and Great Britain (GB-GBN, excluding Northern Ireland that had a separate sample). Again the Swedes and Danes are among the most globalization-friendly. Despite such similarities to the previous two dimensions, there are also noteworthy differences: The Germans, for example, score very low on cultural threat, yet are rather mixed on the previous two economic dimensions. The reverse is true for the Irish: mixed attitudes on the two economic dimensions, but high perceived threat of national culture. 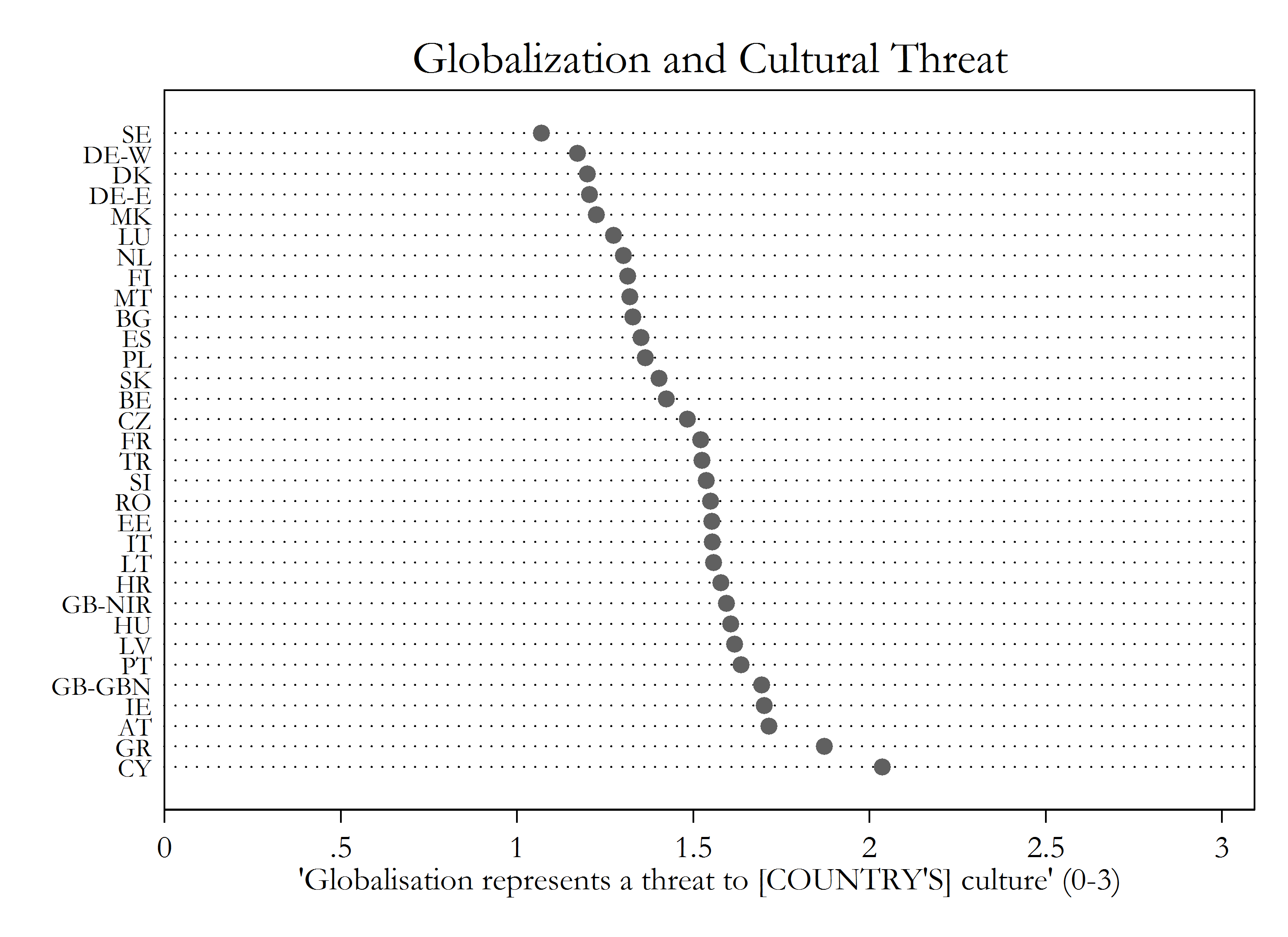 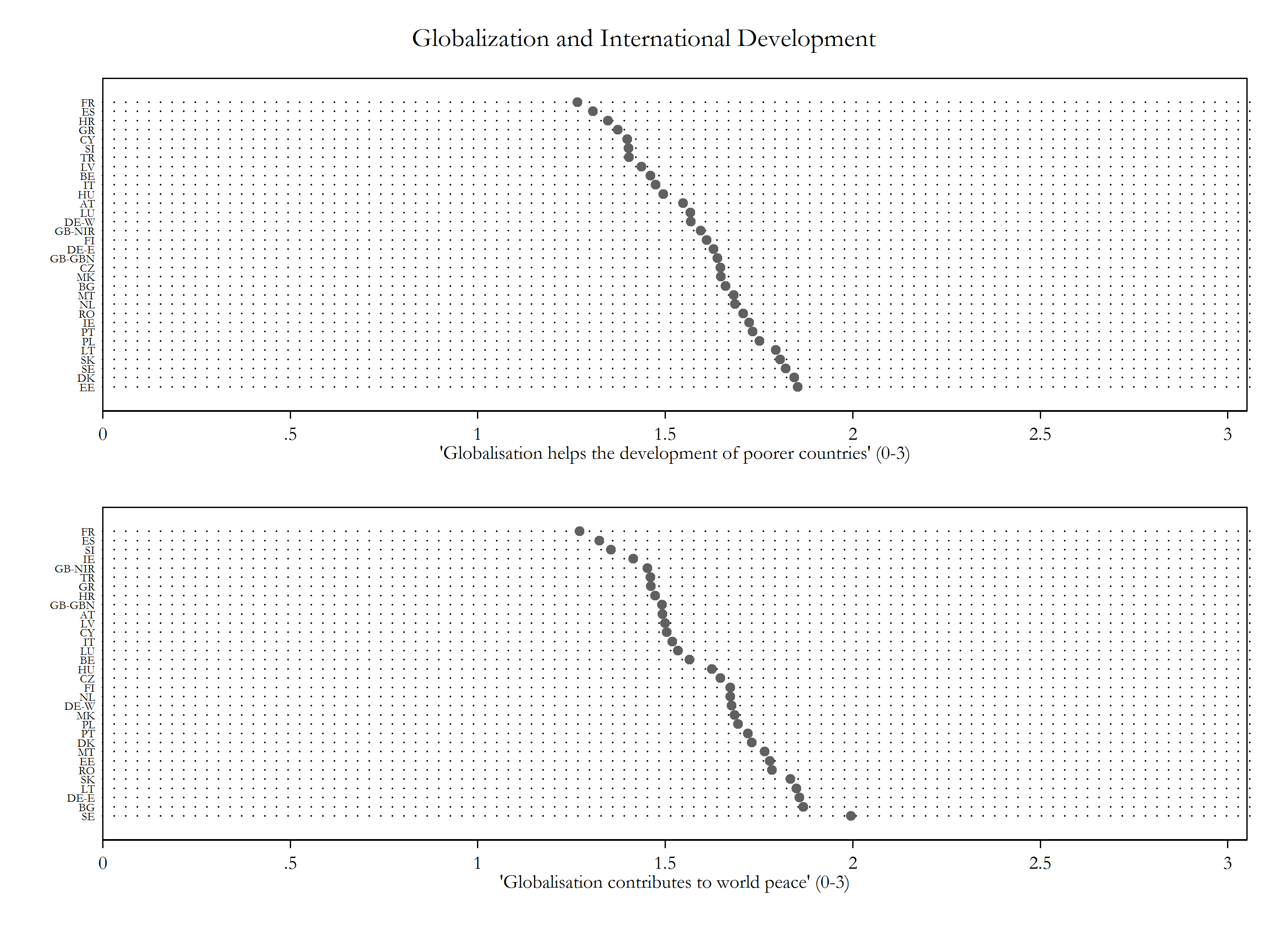 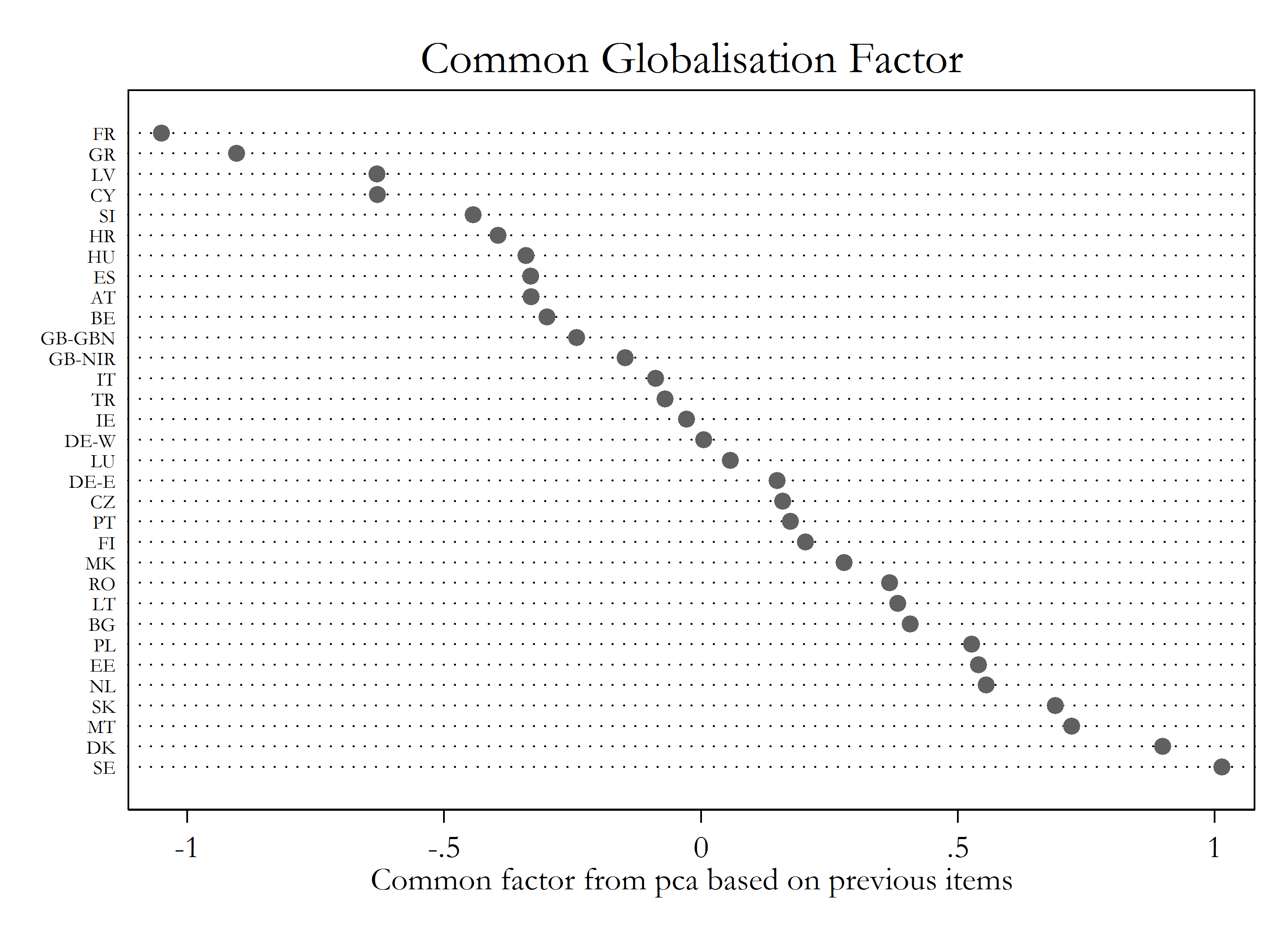 One important conclusion from this exploratory analysis is that cross-country differences in attitudes towards globalization are big. And these differences are likely to be consequential: One hypothesis is that those countries that see globalization primarily as a threat rather than a chance have a harder time to make the necessary adoptions in order to profit from globalization. We might see evidence for this in France’s difficulties with structural reforms. Of course, public opinion on globalization is likely also a consequence of whether countries have profited from globalization in the past and distributed the gains widely among the population. This reasoning creates the possibility of vicious and virtuous circles. I hope to the return to both issues in future posts: What drives these differences in public opinion towards globalization and what are the consequences? In the meantime, I am happy for interesting observations and comments on the data presented above. Feel free to comment!